“Attorney For The Best” – The Hurley Family

“Attorney For The Best” – The Hurley Family

Currently things seem to be changing not daily but hourly. Things that were once acceptable are no longer, conversely, things that were once not allowed, have now become the norm. You can slide sports into that spectrum of ‘things’ that are catching up to modern day thinking. 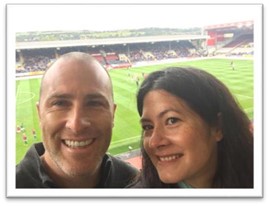 Alisha Hurley knows this all too well, recalling from her youth, “When I was a kid, girls weren’t really supposed to play hockey”, explained Hurley, “there was ringette, but I decided to play soccer. Eventually by the time my younger sister started playing sports she had the choice of playing either.” Times have certainly changed but Hurley is not disappointed about her choice to play ‘the beautiful game’. In fact, she is still playing. “I grew up in the West end. I played club soccer for Ajax (named after the famous Dutch team) and then started playing for Southwest United”, explained the sweeper, “now I play co-ed rec soccer in St. Albert.”

Her limited opportunities in hockey, her desired sport as a child, has also in a way, carried over to her life outside of sport. Hurley’s goal was to join a world which is changing but is sometimes still dominated by the opposite gender. She is now a lawyer. “I have found that moving into what is still a mostly male profession I have used my experience with team sports.” Hurley continues, “the lessons learned through sport have helped me navigate through my career.”

Along with being a mom to five-year-old Xavier (who they call Xabi…as in Alonso…the Spanish soccer star) and partner to Mark Hurley, Alisha also decided to join the board at Sport Central. “I know Matt Hewson (Sport Central Board Member). He and I had talked before and we used to attend KidSport events, and I thought it was such a great organization”, said Hurley. When a spot on the Sport Central board came up, my husband and I knew Simon Stelfox (current Sport Central Board Chair), and that’s how I got involved with Sport Central.” The Hurley family is always looking for ways to give back through sport so “One Christmas our family sponsored a Free Footy team” to help kids in need.

Hurley’s love for sport started young as the middle daughter to Gerry and Sharon Yuen. Even before she was old enough to need her own seat, she would sit on her dad’s lap at Edmonton Oil Kings and Edmonton Oilers games. Her uncle, Vic Mah, was a big supporter of the local sports scene and this support continues with her own family, built through athletic connections. “My husband, Mark, played three seasons for the Golden Bears Hockey program and after he finished his career in Germany he returned to Edmonton”, said Hurley. “One of his ex-teammates was also in law school and that’s how Mark and I met.” After a courtship came marriage and motherhood.

While balancing all the above, the soccer player and her family decided to juggle another ball; they began supporting the Sport Central Champions Club with not one, but two memberships. “It really spoke to me. Kids playing sports is important and invaluable”, said the west end girl, “Mark and I were lucky, we had access to sport as kids but not everyone does. Donating equipment to Sport Central is great but it never hurts to donate money. It feels good to be helping and it’s a good way to support the organization.” One Champions Club membership is personal, from Alisha and Mark. The other is from Hurley’s Meats, an Edmonton company owned by Mark, and his younger brother, Mike. The brothers played two years of hockey together in the WHL with the Tri-City Americans (Mike would later win a Memorial Cup with the Portland Winterhawks in 1998) and then together they won a national title in 1999 as teammates at the University of Alberta. 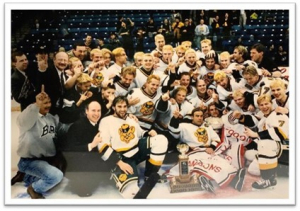 You may have heard of Mike Hurley through his sports success or his amazing perseverance after an unfortunate accident, “It was on a golf trip to Kelowna. They were driving up a hill and the cart rolled” explained Hurley “my brother-in-law, Mike, fell from the cart and suffered a spinal cord injury that left him a paraplegic. At the time he had a seven-year-old son and his wife was pregnant. It was tragic or at least felt that way. It didn’t stop Mike from continuing to live his life including coaching his son with Mark, my husband, helping him out.” 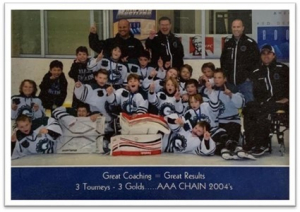 Sport has been such a central theme in their own lives that it is no surprise the Hurley’s have made a personal and business commitment to Champions Club, helping others with sport, showing they are “a cut above the rest.”

(All puns provided by Champions Club’s very own, Gene Principe).

“A Dan with a Plan” – Dan Bokenfohr
Scroll to top